High School DxD (ハイスクールD×D Haisukūru Dī Dī?)is a Japanese light novel series written by Ichiei Ishibumi and illustrated by Miyama-Zero. The story centers on Issei Hyodo, a perverted high school student who is killed by his first date who is revealed to be a fallen angel. He is soon revived as a devil by Rias Gremory to serve her and her devil family.

High School DxD began serialization in Fujimi Shobo's Dragon Magazine in its September 2008 issue. The first volume was released on September 20, 2008, with a total of twelve volumes available in Japan as of April 20, 2012 under their Fujimi Fantasia Bunko imprint. A manga adaptation by Hiroji Mishima began serialization in the July 2010 issue of Dragon Magazine, and later in the March 2011 issue of Monthly Dragon Age, with two volumes currently available as of December 9, 2011. An anime adaptation by TNK aired on AT-X and other networks from January 6, 2012 to March 23, 2012. The anime is licensed in North America by Funimation Entertainment. 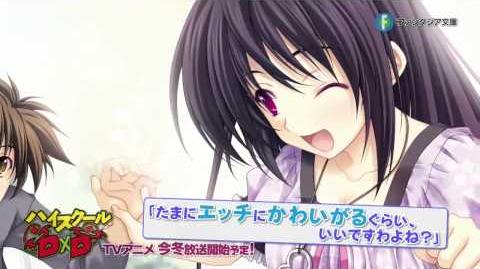 Which Volume that Gave You Best Impression?
Retrieved from "https://dxd.fandom.com/wiki/Light_Novels?oldid=10216"
Community content is available under CC-BY-SA unless otherwise noted.