Rias Gremory リアス・グレモリー Riasu Guremorī?) is the main female protagonist of the series. She is a 17 year old student who is 3rd year at Kuoh Academy and is the Academy's number one idol. She is also known as one of the "Two Great Ladies" (駒王学園の二大お姉さま Kuō Gakuen no Nidai Onee-sama?) alongside Akeno. Known as the Crimson-Haired Ruin Princess (紅髪の滅殺姫（べにがみのルイン・プリンセス) Benigami no Ruin Purinsesu?) and the Princess of Destruction (滅殺姫 Mezatsu Hime?), she is the heir to one of the highest ranking and famous Devil families, the Gremory Family (グレモリー眷属?). She is enrolled in Kuoh as an exchange student, but the truth is that she holds the power in the Academy, and acts as the President of the Occult Research Club which is made up of the Devils under her command, and her rank is "King". She is an invincible heroine who saw the power sleeping within Issei, and took a curious interest in him.

Even though she is fiery and exhibits a wild temperament which plays into her getting angry & violent when someone insults a member of her family or her peerage, Rias is kind hearted and very protective. She also dislikes cruelty towards people.

Rias has long knee length crimson hair with an extra pluck sticking out on top, blue eyes with a taint of green, she has fair skin, she is tall and has a busty hourglass figure 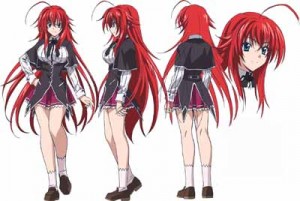 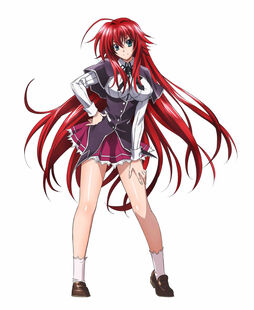 In the light novels, it is revealed that her brother is, in fact, one of the Four Satans, Lucifer, and both of them possess the Power of Destruction that was inherited by their mother, who came from the House of Baal which are famous for that power. She revives Issei as her servant after the latter was killed by the Fallen Angel Raynare. She is both kind and soft to her servants, but becomes a completely different person when training or fighting. She is proud of her family's name, but she does not like being seen as Rias of the Gremory Family. The reason for her living in human world is because there, everyone sees her as just Rias, not as a Devil or the heir of the Gremory Family or as the Crimson Ruin Princess. It is also because of this reason Rias has rejected her engagement with Riser.

As the series progresses, Rias begins to develop strong feelings and eventually falls in love with Issei, which becomes more obvious after Issei defeats Riser, and becomes very jealous when he is surrounded by other girls. She moves into his house after Issei defeats Riser to end their engagement. At the beginning of Volume 10 of the light novels, Rias' mother, Venelana, encourages her to push her relationship further with Issei (in which Rias would attempt to seduce Issei), but gets frustrated when Issei could not call her by her name. At the end of the same volume, Issei finally confesses and calls her Rias for the first time instead of President (部長 Buchō?, lit. "Club President"). She cries tears of joy and tells him that she feels the same way and the two officially become a couple. Though it seems none of the other girls (Akeno, Xenovia, Asia, Koneko, Irina, Ravel) have given up on Issei. She has also shown more tolerance towards Issei's dreams of becoming Harem King.

In Volume 11, Rias gains the ability to channel a red light from her breasts which is capable of restoring Issei's energy, but temporarily sacrifices the size of her breasts in the process.

1/47
Community content is available under CC-BY-SA unless otherwise noted.
Advertisement