}} Xenovia (ゼノヴィア Zenovia?) is a Holy Sword wielder who wields the Holy Sword Excalibur (there are actually seven swords named Excalibur). First appearing in Volume 3 of the light novels, she was sent by the Church along with Irina to retrieve and destroy the stolen Excalibur swords. Calm and collected, she only speaks when it is necessary and prefers not to get involved into problems that do not concern her. Unlike Irina who is an artificial Holy Sword user, she is a natural-born user, which is evidenced by her being the sole wielder of the Holy Sword Durandal.

The name of her sword is "Excalibur Destruction" (破壊の聖剣（エクスカリバー・デストラクション） Eksukaribā Desutorakushon?), which has the ability to unleash pure, destructive power that can easily shatter anything it comes into contact with. After she finds out that the God in the Bible has died in the war, she decides to join the Occult Research Club as Rias' servant, becoming her second Knight. She tries to seduce Issei whenever she can because she wants to give birth to a strong baby. She shares a very close relationship with Asia. as she is touched by the latter's kindness, and later apologizes to her for calling her a witch.

As the series progresses, it is shown that Xenovia has romantic feelings for Issei due to his determination to protect his comrades even if he gets injured by doing so. She also emits a scary aura whenever the other girls are getting more closer to him. She later moves into the Hyodo residence in Volume 4. As she was raised in a church, she lacks common sense that normal people would have, shown when she once took a box of condoms to school. In Volume 9, Xenovia has her Durandal upgraded into the Ex-Durandal (エクスデュランダル Ekusu-Dyurandaru?), which is the fusion of Durandal and the fragments of the Excaliburs molded into a sheath in order for Xenovia to better control its powers. It is also possible to temporarily lend out one of the seven Excaliburs, as shown by Rossweisse in Volume 9. The Ex-Durandal was shattered by Sousou's True Longinus in Volume 11, but is repaired and fully completed in Volume 12 after gaining the final Excalibur fragment that was wielded by Arthur Pendragon. Once fully mastered, Xenovia will be able to use any of the abilities of one of the Excalibur fragments she desires. 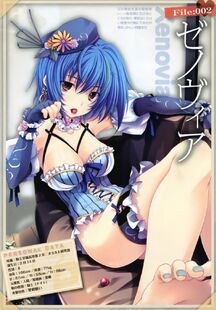 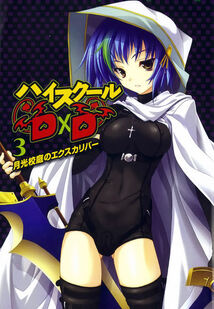 Add a photo to this gallery
.

1 of 2
Add photo
Retrieved from "https://dxd.fandom.com/wiki/Xenovia?oldid=10438"
Community content is available under CC-BY-SA unless otherwise noted.